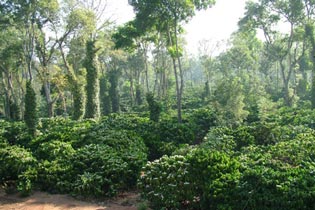 The northern part of district was under the reign of Kadambas between the 2nd and 6th century. However, after a war between the Kadambas and the Gangas in the 11th century, the Cholas were the sole rulers of this province. After the 12th century, the Hoysalas, who were ruling Hassan district, defeated the Cholas and in the 14th century, the Vijayanagara kings took over and ruled the province. After their downfall, the local Nayaks took over different parts of kodagu or Coorg. The war between different rulers of the province and the Haleri kings made the latter the new rulers of Coorg from the year 1600 to 1834, and after their reign ended, the region of Coorg was under colonial rule. Coorg was declared as an independent state in the year 1950 by the Indian Constitution and when many Indian states were reorganised in the year 1956, Coorg was merged with the state of Karnataka and declared a district. Coorg has three taluks which include Madikeri, Somavarapete and Veerajapete. People & Culture of CoorgSome of the popular festivals feted here include the festival of Arms-Keilpoldu celebrated in the month of June. As part of the celebrations of this ancient festival, weapons are polished and worshipped before using them again. The festival celebrated around the Cauvery River is known as Cauvery Shankaramanaoro Tula Sankramana. In the months of November and December, the harvest festival “Huttari” is celebrated by singing to folk songs and performing traditional dance forms.

The economy dependent on agriculture, plantations and forestry, Coorg is considered to be one of the most prosperous districts in Karnataka. Known as the ‘Coffee Bowl of India’,Coorg contributes 30% to the total coffee production in India. Besides coffee and pepper, cardamom and oranges are the other mainstays of Coorg’s economy. Set amidst verdant valleys, misty hills and acres of coffee plantations, Coorg is a perfect getaway for travellers. Coorg is also a paradise for adventure junkies. Its hills are a perfect for adventure activities like trekking, rock climbing, biking and white water rafting. December to May is the best time to trek in Coorg.

There are peaks like Brahmagiri, Pushpagiri, Mandalpatti and Tadiandamol. For white water rafting, holidaymakers can visit Dubare and Barapole in Coorg.

A great Must Visit Spot "Coorg is beautiful destination, nature in its glory, great scenes to view, a lot of spots, parks, falls, estates to drive through, elephants in its glory, ancient temples to pray, a golden temple in the south & well managed resorts with games and activities for all.

Kodagu is an administrative district located in the southern state of Karnataka. It is also popularly known as “coorg” and covers an area of 4,102 sq km in the region covered by the Western Ghats. To its north-west lies Dakshina Kannada, in the north is Hassan district, to its east is Mysore, and Kannur district of Kerala is located at its south-western border. The headquarters of Kodagu district is Madikeri.

Also known as Coorgand nicknamed as the "Kashmir of South", Kodagu is one of the precious gems in Karnataka's crown. Located in the Western Ghats of south-western Karnataka, it can be pictured thus: miles of undulating topography carpeted in green covered with a misty veil, thickets of bamboo, sandalwood and rosewood forests. You will also see many stunning waterfalls and ravines, numerous streams and rivulets winding their way through the landscape, sectors of paddy fields and coffee bushes interspersed with grassy downs and intriguing spice farms full of pepper, cardamom, oranges, nutmeg, turmeric, lemon grass, etc. Kodagu a dreamland beyond belief.Kodagu offers a unique blend of advent are quite challenging and blessed with oodles of natural beauty. However, outdoor activities go beyond trekking here. You can try angling in Kaveri River and golfing at Coorg Golf Links (Bittangala), Golf Course (Pollibetta) and Mercara Downs (Mercara). An ideal summer retreat, Coorg tourism offers some wonderful moments of relaxation and rejuvenation. You could plan your trip in monsoon as the place looks its best during rains.

Kodagu or Coorg is called as the Scotland of India is a marvellous hill station located in the southern part of Karnataka. It is a small district of the state with distinct culture, unique customs and traditions. The people of Coorg are known as Kodavas or Coorgies. The misty hills, lush green valleys, evergreen forests, breathtaking waterfalls will definitely lure one’s eyes. The region is surrounded by coffee plantations, orange groves, cardamom, pepper plants and dense forests. Cauvery one of the major rivers of South India takes birth at Talakaveri in Coorg. The people of Kodagu are known for their hospitality and bravery. Coorg is connected to the other parts of the state and the neighbouring state of Kerala by road. One trip to Coorg and the memories will linger in you for the rest of your life. 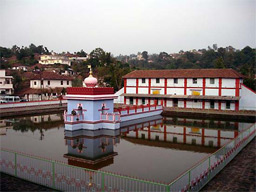 This was built in 1820 by Lingarajendra the then ruling King to ward off the evil caused by "Brahma Rakshasas". The Shiva Linga is said to be brought from the holy place "Kaashi". This temple has an unusual architectural combination of 'Indo-Sarsenic' Style.
Nearby is the holy tank. Regular poojas are performed in the temple for the different deities like Lord Subrahmanya and Ganesha. 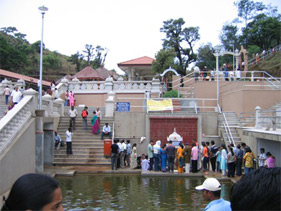 The worshipping Goddess of Kodagu is Mother Cauvery. The birth place of Sacred River, Cauvery, Talacauvery is one of the main pilgrim centres of Karnataka. stands Talacauvery at the foot of "Brahmagiri Hills". Here emerges river Cauvery and gushes her way through Karnataka and Tamilnadu, sanctifying lakhs of hectares of land around her, ending her 760 km journey at Poompuhar in Tamilnadu to join Bay of Bengal.
The Auspicious day 'Tula Sankrama' falls on October 17th every year, where the holy cauvery appears by a sudden upsurge of water in the 'Kundike' - the pond, while the pilgrims take a holy dip. There is no separate worshiping idol for Goddess Cauvery. The pooja is performed for the holy water in the holy 'Kundike". In Talacauvery stands the "Shiva Linga" installed by Sage Agasthaya. About 300 steps leads to the top of Brahmagiri Hill where the exquisite view of mother nature can be experienced. 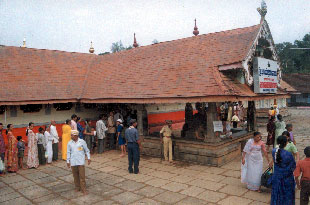 Also known as 'Dakshina Kaashi', Since Bhaganda Maharshi Installed Shivalinga here the place is known thus. Talacauvery is 8 kms from here. Near by are the temples of Maha Vishnu, Subrahmanya and Ganapathi.
The "Triveni Sangama" of the sacred rivers, the Cauvery, the Kannike and the Sujyothi a Subterranean stream is found here . An important Pilgrimage centre called 'Bhagandeshwara Kshetra', where the pilgrims first take a bath, and then ascend the hills for a holy dip at Talacauvery.
The only "Apiculture training centre" "Madhuvan" is in progress here. Honey by the brand name "Coorg Honey" is produced in Bhagamandala. Quite a few buses ply from in and around Madikeri. Hotels including one from Karnataka State Tourism Development Corporation "Hotel Mayura Kaveri Yatrinivas" is opened. (Ph : 08272 - 2473143) 2 kms away from Bhagamandala enroute Madikeri there is a petrol bunk. 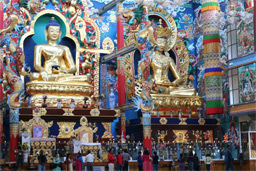 A recently built "Namdrolling Monastery" a world famous Tibetan Golden temple a toast to the eyes is in Bylakoppa
also the second largest Tibetans settlement in India, Three majestic Gold coated 40 feet hight idols of Buddha & Padmasambhava, Amitayush Statue inside the temple, which is also called as Padma Sambava is the main attraction. worthwhile to visit. 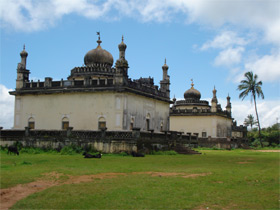 Dominating the skyline are the Gadduge or three tombs with their Islamic style building domes and minarets with gold coating built in Indo Sarsenic style, The entrance to each tomb has Carvings of Hindu Deities. The Central largest tomb more ornate than the other two, contains the graves of Virarajenda and his wife Mahadevi Amma. The medium sized tomb is of Lingarajendra and the simplest tomb contains the grave of Rudrappa Virarajendra's Guru. A bird's eye view of Madikeri can be had from here. 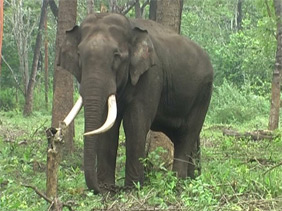 A game sanctuary also known as "Rajiv Gandhi National Park" is 90 kms from Mysore and 46 kms from Gonikoppa, extend to 647 Sq. Kilometres. An excellent opportunity to witness wild animals of different kinds, from the majestic elephant to the Deer, Tiger, Cheetha, jackal etc. The forest comprises of valuable wealth like the teak, rosewood, sandal wood trees etc.
Though plying of private vehicles is not allowed inside, the departmental vehicle takes the tourists inside the sanctuary. 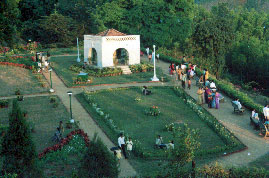 Overlooking a deep valley is the delightful garden, the main spot of attraction. The Raja's seat is so called because the Raja's of Kodagu spent their evenings at this vintage point watching spectacular sunsets. The lovely flowers in full bloom and the fascinating view of the winding roads makes the visit a memorable one.
An added attraction is the toy train "Baba Saheb Express" near by with a park for the kids. Very next to Raja's seat stands the ancient Temple "Chouti Mariyamma". A furlong away stands the "Gandhi Mantap" with the statue of Mahatma Gandhi built in memory of the Father of Nation. 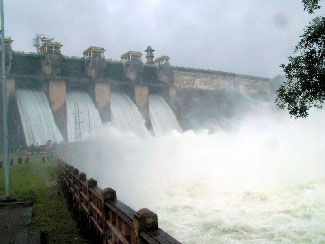 A dam built across the tributary of Kaveri with a length of 2775 ft. and 174 ft height. A real picnic spot with the back water gushing out and with a Cauvery temple nearby. 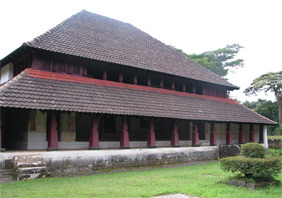 At the feet of 'Tadiyandamol" the highest mountain of Kodagu, stands proudly the Nalknad Palace recalling the memories of history. Built in 1792 by Dodda Viraraja, the two storeyed palace enthrals any one with its attractive paintings and architecture. In Kakkabe there is also the "Paadi Igguthappa' temple built by Lingarajendra during 1810. The inscriptions of the King can be found here. 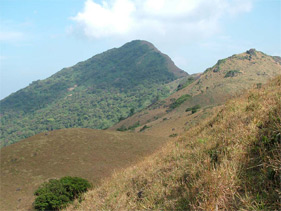 'Tadiyandamolu' is the highest mountain of Kodagu. 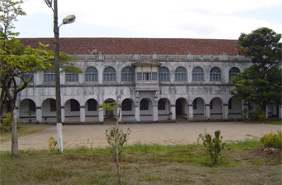 In Architecture, Madikeri is unusual. Built on high grounds, the Madikeri Fort looms large over the town. This was rebuilt between 1812-1817. At the entrance stands the majestic sculpture of horses erected on the entrance wall.
Within the fort is the palace which now houses government offices. The palace is built in European style with secret underground routes. Now a stone structure of tortoise stands as a witness to it. There are initials of Virarajendra marked 'V' here and there. As a mark of regret for the brutal killing of the royal elephant by King Vira raja stone replicas of two mighty elephants stand nearby.
There is also a unique museum with memorable of ancient antiques like weapons, idols, canon etc. adds more attraction to this place. A Ganesha temple also adds attention. 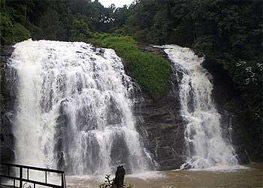 A thrilling 29 kilometre drive through forests and coffee plantations leads to the most popular attraction and picnic spot - the Abbi Falls. The gushing sound and the beauty of the falls can be experienced from the hanging bridge. Engagingly beautiful in summer, an awesome sight is seen during monsoon. Bathing in deep water, and swimming is not very safe.
Private vehicles has to be hired to get here. Driving of heavy vehicles in this narrow road is prohibited at present.

The beautiful water fall, "Irpu falls' which flows as Laxman theertha, A Shiva temple dedicated by Lord Sri Rama is on the banks of the River. Walking besides the paddy field and watching the gorgeous falls which is about 60 ft. is a real treat to the eyes. This is also an ideal picnic spot. Quite a few Houses are available for "Home stay".
There are enough guest houses near Gonicoppa, Virajpet and Kutta for those visiting Nagarahole and Irpu. Buses also ply from Gonicoppa. 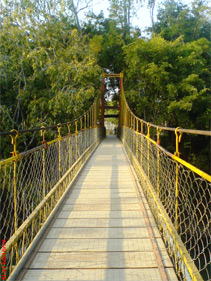